Where Did Oolong Come From?

Everything has a story. There is a history behind every single thing on this planet.

The vegetables you are preparing for dinner didn’t just magically appear. No, they came from a hard-working farmer who planted, cultivated, harvested, and transported them to your local grocery store. This farmer probably worried about the amount of rain that was forcasted or lack thereof, he fretted about the heat and what it would do to his crop, his expensive equipment better not give out because he depends on this crop to feed his own family.

Recently, we have been getting some questions about the history of Oolong tea and how it got its name.

This really got me thinking. How did people think to steep tea leaves in hot water and drink it? Seems kind of odd nowadays. I wouldn’t just go outside and pick some leaves, let them sit around for a little bit and then put them in my beverage.

So, just how did tea comeabout?

Legend has it that the Chinese Emperor Shen Nong discovered tea in 2737 BC while boiling water in the shade of a tree. A light breeze caused some leaves to fall into the water, which the emperor tasted and found to be delicious. Through the ages, further experimentation revealed the natural healthy properties and benefits of a variety of different teas (including Oolong).

Though there isn’t much written about Oolong tea in particular, we do know this.

Like black tea, it was first produced in Wuyi Shan, Fujian Province, China.

The beginnings of Oolong tea were more discovery than invention since coincidence played a major role in its inception. 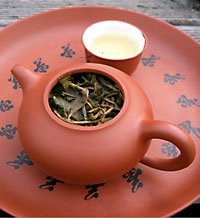 As with most Chinese teas, there are multiple legends about how exactly Oolong manufacturing originated. There are two general stories (and many variations) that offer different explanations for the source of the name Oolong (the Chinese name wu long literally translates to “black dragon” or “black snake”).

According to one legend, a tea farmer picked leaves off a tea bush to make them into tea. He was scared away by the approach of a black snake and left the picked leaves behind. When he came back the next morning to collect the leaves, they had changed color and were brownish-green. He took the leaves home and processed them into tea. He enjoyed this different tea very much and decided to name it after the black snake that had led to its creation.

Another legend tells the story of Wu Liang as the discoverer of oolong tea after whom the tea was named. The story goes that Wu Liang was on his way home with a large bundle of fresh tea leaves after picking all day when he saw a deer. He went hunting after the deer and brought it home. He was so absorbed in the preparation of this unexpected feast that he forgot about the tea he had carried. When he returned to his bundle the next day, he discovered that the leaves had changed color and turned half-way brown. Worried about losing his harvest, he started processing the tea immediately like he usually would. When he tried a cup of his finished tea, he was amazed by the unique flavor and aroma of his tea. He shared it with his friends and neighbors and the word quickly spread about his unusual tea which eventually became known as Wu Long cha.

That grower decided to become an entrepreneur, taking his tea discovery to market, where he struck gold and his story went down in Oolong tea history.

Teas from Mount Wu Yi were soon being sold throughout the Empire. They became so popular that many famous Qing Dynasty poems such the “Wu Yi Tea Song” and the “Wu Yi Tea Tale” were written in their honor.

Today the Mount Wu Yi region of Fujian is widely regarded as one of the purest places on Earth. The region is virtually pollution free, its air and water amongst the cleanest anywhere. In fact, the region is so pristine that much of Mount Wu Yi is located in an officially designated Bio-Reserve. In 1999 the mountain was even recognized as a UNESCO World Heritage Site.

What Does This Oolong Tea History Mean For WuLong Tea?

It means that WuLong tea is exceptionally pure, resulting in very high levels of polyphenols and antioxidants, and only the most highly qualified Tea Masters are permitted to grade the finished product. This unique skill and experience in the Fujian Province is currently limited to a handful of just 20 such Tea Masters, who are currently sanctioned to grade these incredible teas.

At Okuma, we are proud to say that the heritage and history of our premium grade of Oolong tea is as rich as its flavor, hailing from this tremendous corner of the planet.

Start shopping for WuLong tea today, and see how easy it is to achieve your healthy body.

Try it and love it!

Yours in Health & Happiness,